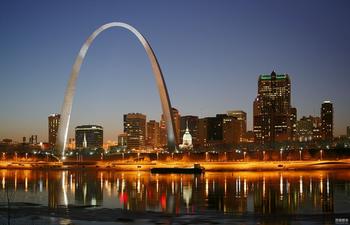 Meet me at the Arch.
Advertisement:

St. Louis, Missouri, is known for the Gateway Arch and... well, actually, that's pretty much what it's known for now, which is a real shame considering its history. St. Louis sits just south of the confluence of the Missouri and Mississippi Rivers, a naturally prudent place for a major settlement; the ancient Native American city of Cahokia, the largest pre-Columbian settlement in what would become the US, was more or less just on the other side of the river. The French were the first Europeans to settle in the area, officially founding St. Louis in 1764. The settlement then almost immediately passed into Spanish hands (though it remained culturally French), before going back to France in 1800 and then being sold to the fledging United States as part of the Louisiana Purchase in 1803. Keeping up so far? The city's location at the convergence of the two longest rivers in North America made it a strategic and commercial hub, which in turn helped it grow into a huge city and made it an especially big deal back when riverboats were considered a speedy form of transportation. At the start of the 20th century, St. Louis was the fourth-largest city in the entire country. However, the city has been declining in importance (and population) for quite awhile now. It's lost population in every census since 1950, is no longer even in the top fifty largest cities in the U.S., and is no longer even the largest city in Missouri.note There's an asterisk there, as we'll discuss below: Many of those people just moved to the suburbs, and the total metropolitan area still has a larger population than Kansas City's.

St. Louis is nicknamed "the Gateway to the West" (cf. the Gateway Arch), in reference to its history as a staging ground for westward expeditions by Lewis and Clark and others and its historical position as the last major urban enclave en route to the western frontier. It has sometimes been called "the westernmost eastern city" for similar reasons. (Though Missourians who live more than a couple of dozen miles from the Arch may instead call it "the Exit from the East.") Politically, St. Louis is a fairly deep blue stronghold in an otherwise mostly red state, a trait it shares with Jackson County (Kansas City) and Boone County (the University of Missouri–Columbia). Speaking of counties, the City of St. Louis is not in any of Missouri's 114 counties. It used to be part of St. Louis County but voted to secede in 1876. Besides affecting the city's tax base and infrastructure, this separation has also contributed to St. Louis's population shrinkage by comparison with other major U.S. cities—since the borders of the city itself are fixed, the common practice of incorporating outlying suburbs has been halted for the last century and a half. The full metro area is actually the 21st most populous in the U.S. to this day—still a major downgrade from its earlier prominence, to be sure, but not nearly as bad a drop as it looks on paper. Part of that metro area lies across the river in Illinois; those go by the description "Metro East" for obvious reasons.

St. Louis has a running rivalry with fellow Midwestern giant Chicago dating back to when they were the biggest cities in the Midwest. The Louisiana Purchase Exposition (more widely known as the "St. Louis World's Fair") was held there in 1904, which also hosted the third Olympic Games, the first held in America—Chicago's still kinda mad about this, since they were supposed to have the games before they switched to take advantage of the fair. Today, the only thing St. Louis really competes directly with Chicago (outside of sports) is its crime rate; St. Louis' violent crime rate is regularly the highest in the nation.

The Gateway Arch has a viewing area at its apex which can be reached by so-called tram cars that ascend either leg of the arch. Each tram consists of a chain of cars with circular cross-sections, which remain horizontal as they travel up and down the changing inclines. Definitely not for the claustrophobic, however, since each car holds five people with no standing room and looks a bit like a washing machine drum.

St. Louis is home to:

The city was home to two notable NFL franchises. The Chicago Cardinals moved to the city in 1960. They played there for 28 years and were quite mediocre; they only visited the playoffs thrice in that span, never actually won in the postseason, and left for Arizona in 1988. The city put up the bill for a new stadium in the '90s hoping to attract a team and brought in the Los Angeles Rams when owner Georgia Frontiere, a St. Louis native, thought the team would do better in her hometown than the crowded LA market. For a time, it actually did: "The Greatest Show on Turf", which lasted from 1999 to 2001, won the Super Bowl in 1999 by one yard against the Titans, and made it to the Big Game again in 2001 only to lost to the Patriots on a last-second field goal. After Frontiere's death in 2008, however, they didn't put up a single winning season. Since their lease allowed them to depart if their stadium was deemed subpar and the economically struggling city couldn't afford to renovate it, the Rams eventually hightailed it back to LA in 2016.

Anheuser-Busch was founded in St. Louis, and it is still home to the international brewing conglomerate's North American headquarters. (Maybe that has something to do with the whole crime thing?) These days almost nobody says "Saint Louie" unless they're joking or referencing Yogi Bear.

People from St. Louis (and vicinity):