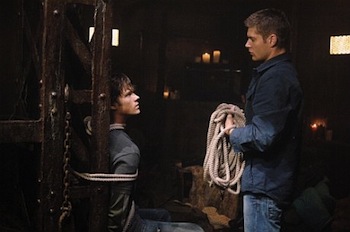 Me? I know I'm a freak. And sooner or later, everybody's gonna leave me.
Dean: I really wish things could be different, you know, I wish you could just be Joe College.
Sam: Nah, that's okay. You know, truth is, even at Stanford, deep down, I never really fit in.
Dean: Well, that's 'cause you're a freak.

Sam and Dean go to St. Louis to investigate a murder at the behest of Becky Warren, one of Sam's college friends. Her brother Zach is accused of killing his girlfriend and there is forensic evidence to prove it, but Becky insists that he was with her when the murder took place. Sam and Dean uncover a shapeshifter who takes on Dean's form and attacks Becky.

For this episode = 2 humans and 1 shapeshifter.