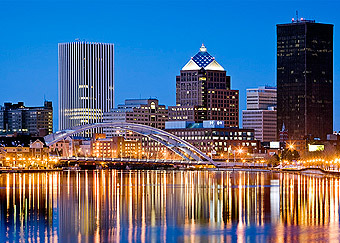 Downtown Rochester at night, looking north along the Genesee.
Rochester, NY is a medium-sized city located in northwest New York State between the better-known Buffalo and Syracuse, where the Genesee River meets Lake Ontario. The city is notable for its high poverty and murder rates, as well as being the Upstate haven of the arts; Rochester has its own Philharmonic Orchestra, music college (Eastman), and musical academy (Hochstein). Much of Rochester's arts background is due to philanthropy from bygone industrialists such as George Eastman, who reinvested in the city even after his death, leaving the Eastman House among the many local museums and art galleries. The Strong Museum is noted for the National Museum of Play, as well as its butterfly conservatory. Rochester is among the more wired cities, as the local heritage of high industry has created a local lean towards acceptance and use of the high-tech.

Rochester has strong historical ties with the women's rights and abolitionist movements, as well as involvement with the Erie canal. The area is rife with national heritage and historic sites pertaining to the canal, underground railroad, etc.

When using maps of the area, don't assume the Inner Loop highway will be of any use; it was closed around 2014 and is basically being filled in/covered over to reconnect Downtown with the rest of the city.

The city and its surrounding suburbs took a big hit financially in the last twenty years, as Kodak (among other major employers) has downsized significantly. Kodak shed almost eighty thousand employees there, in only fifteen years. Bausch and Lomb, Xerox, and other manufacturing companies followed suit. This has, however, led to a local glut of unemployed, highly trained specialists, which is leading to a surge in high-tech startups. Rochester is still one of the two national centers for specialized optics, and has no fewer than eight significant local colleges (U of R, RIT, Nazareth, St. John Fisher, MCC, Bryant and Stratton, Roberts Wesleyan College, SUNY Brockport) who also snatched up many expatriated Kodak employees.

Rochester is said to have an accent associated with it; pronunciations of certain vowel sounds and how you read "the Town of Chili" are shibboleths for natives.

Rochester is home to one of the highest per capita populations of the Deaf and the deaf due to the location of the National Technical Institute for the Deaf at RIT, as well as the excellent local medical system and a populace who is more compatible with the deaf due to their relative prevalence.

Rochester is also home to a relatively high per capita population of people suffering from AIDS or similar diseases, also because of the local research hospitals.

In addition to the above, the city also supported the Western New York Flash in several top-level women's football/soccer leagues during the current century.note If you're wondering why Rochester would get a top-level women's soccer team when a boatload of much larger cities didn't, two words: Abby Wambach. The US women's legend is a Rochester-area native, and played for the team for much of the last part of her career. However, the organization sold the rights to its franchise in the National Women's Soccer League to interests in the Research Triangle area of North Carolina, which relaunched the team as the North Carolina Courage. This came immediately after the Flash won the 2016 NWSL championship. The organization played in the second-level United Women's Soccer for a couple of years in Buffalo, but has since reverted to a youth-only operation.

The suburbs of Rochester have been associated with stereotypes:

Local businesses which have become ingrained to the area's identity via MemeticMutation include:

Rochester is home to terrible roads because of the repeated freeze/thaw induced by the Great Lakes' thermal moderation in the winter, which also make it common for there to be several foot+ snowstorms in a given year (one of our sports teams should be called the Lake Effect). Bitching about such is a Rochesterian pastime. When someone from the south moves here, they learn how to drive in low-traction situations.