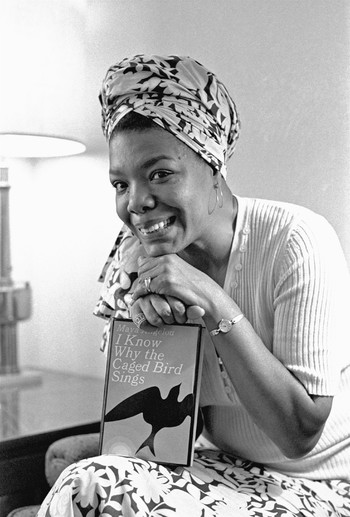 “All my work, my life, everything is about survival. All my work is meant to say, ‘You may encounter many defeats, but you must not be defeated.’ In fact, the encountering may be the very experience which creates the vitality and the power to endure.”
Advertisement:

Maya Angelou (born April 4, 1928 – died May 28, 2014) was an American author, poet, singer, dancer, actor, playwright, composer and activist. Angelou is one of the most celebrated poets/writers in American history, known for bringing a special spotlight to the lives of black American women.

To concisely describe her life is a challenge. She was born in St. Louis, Missouri and had a tumultuous childhood, her parents split while she was only 3 years old, she was sent to live with different guardians, and she was raped at the age of 7 by her mother's boyfriend, who was later killed by her uncles. She became mute after her assault, and it took a family friend and teacher to help her speak again. That friend also introduced her to classic literature, which started her lifelong love of reading and writing.

As she grew into an adult, she became a Renaissance Woman of sorts; she was the first black woman to be a cable car conductor in San Francisco, and was a dancer and singer in clubs across the US, all while writing professionally. She traveled in Europe and lived in Africa. She also was an activist and fundraiser for the Civil Rights Movement, which put her in touch with Malcolm X, whom would become her friend. She was also friends with Martin Luther King Jr., who was assassinated on her 40th birthday, April 4, 1968. She stopped celebrating her birthday on that day and instead sent flowers to Coretta Scott King, King's widow.

After having dinner with friends including James Baldwin, she decided to write an autobiography. That autobiography was I Know Why the Caged Bird Sings, detailing her life from age 3 to age 17. The biography was an international sensation and solidified Maya Angelou as one of America's most prolific authors. She continuing writing, composing, and even directing, up until her death on May 28, 2014 at the age of 86.

Works by Maya Angelou or participated in with their own pages