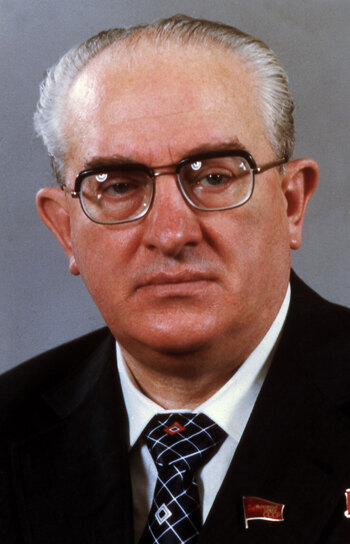 "Responsible statesmen have only one choice, to do everything possible to prevent a nuclear catastrophe. Any other position is short-sighted, and more so, it is suicidal."
Advertisement:

Yuri Vladimirovich Andropov (15 June 1914 — 9 February 1984) was a Soviet politician, former head of the KGB, and eventually leader of the Soviet Union, succeeding Leonid Brezhnev upon his death in late 1982 and staying in power for a little over fifteen months before passing away himself.

Andropov's first position of any real power came when he was appointed Ambassador to Hungary in 1954. Two years later, he found himself in the middle of an uprising that deposed Hungary's communist regime in favor of a more Western-sympathetic government. Nikita Khrushchev by all accounts didn't consider Hungary to be a prize worth hanging onto, but Andropov convinced him that it would make him look weak, both at home and in other Eastern Bloc countries, if he didn't take some form of action, leading to the Soviets invading, brutally putting the rebellion down, and executing the members of the new government. Andropov's role in the affair — including falsely telling the Hungarian government that there would be no Soviet invasion, when in fact the Red Army was only hours away from Budapest — made him an extremely infamous figure in the country, even to this day.

After holding various positions within the governments of Khrushchev and then Leonid Brezhnev, Andropov was appointed as head of the KGB in 1967. It was in this role that he made his largest impact, in the pursuit of his self-described goal of achieving "the destruction of dissent in all its forms". There was no political appetite to go back to the days of Stalin's purges, however, meaning that Andropov was forced to resort to other means to achieve said goal. He therefore had it adopted as a semi-official policy that to oppose Communism was a sign of serious mental illness, and that such people had to be removed from society for the protection of the country's social stability. This resulted in countless dissidents being detained indefinitely in mental hospitals, or being "persuaded" to move to other Eastern Bloc countries, where they would be somebody else's problem.

Throughout Brezhnev's regime, Andropov would prove to be one of his key advisors, and played a major role in the suppression of the Prague Spring of 1968 (though Brezhnev went about it in a considerably less violent way than Andropov wanted), along with the Soviet invasion of Afghanistan in 1979. Conversely, however, Andropov actually talked Brezhnev into not invading Poland when the Solidarity movement began gaining power in 1981, believing that the Polish government could deal with it themselves — which proved correct for the short term, but less so for the longer term.

In May 1982, Andropov retired as head of the KGB and took up a more prominent role in the Politburo. By this point it was obvious that Brezhnev did not have long left to live, and that most of the people best-placed to succeed him were hardly any younger, and scarcely in any better health than he was. Upon his death in November of that year, Andropov succeeded him, partly because of the connections afforded to him by his years in charge of the KGB, and partly because, even at the age of 68, he was still seen as the youngest and fittest of Brezhnev's inner circle.

Taking over an economic and political situation that had begun to critically destabilize during the final years of his predecessor, Andropov found himself paralysed by indecision; as much as he wanted to pursue economic reforms and withdraw from the increasingly costly war in Afghanistan, he believed that to change track on these policies would be interpreted as weakness, and possibly even an attack on doctrines that had existed since the days of Josef Stalin himself. About the one thing that Andropov, who wasn't oblivious to the circumstances in which he came to power, could do, was to start replacing people in high office with younger counterparts — one of the beneficiaries of this policy being a certain Mikhail Gorbachev.

The relationship between Andropov and Ronald Reagan was quite possibly the worst between any Soviet and American leader after that of Khrushchev and John F. Kennedy, which played a major role in Reagan's stepping up the Cold War and openly denouncing the Soviets as an "Evil Empire". In a major display of the Sunk Cost Fallacy, Andropov kept funnelling more and more of the country's increasingly fragile economy into the military, despite publicly speaking of his desire to avoid any conflict, and describing Reagan's Strategic Defense Initiative as "dangerous insanity". Negotiations on nuclear reduction also completely broke down during Andropov's leadership, and wouldn't be seriously attempted again until Gorbachev became leader. Further bad blood was created between the countries when a Korean passenger jet carrying several American passengers — including a congressman from Georgia, no less — was shot down after mistakenly entering Soviet airspace, and Andropov first attempted to cover it up, then falsely claimed that the aircraft had been smuggling weapons into South Korea.

Among the backdrop of his political struggles, Andropov was suffering from increasingly poor health, first suffering kidney failure four months after he came to power, and then being forced to move permanently into a military hospital in mid-1983. He died the following February, and was succeeded by the even older Konstantin Chernenko.