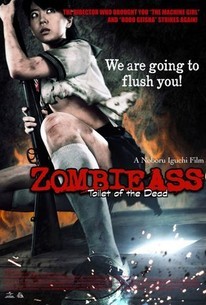 Zombie Ass: Toilet of the Dead (ゾンビアス Zonbiasu) is a Japanese comedy horror film that was released in September 2011 at the Austin, Texas Fantastic Fest film festival before eventually hitting theaters in Japan in February 2012. The movie is about a school girl name Megumi going on a camping trip with her group of friends, only to find themselves in a swamp full of zombies. These zombies don't behave the way you would expect them to. The group eventually discovers the origins of these zombies and try to find the help they can to escape.

As standard of a summary as that sounds, the film is a totally different story.

Zombie Ass: Toilet of the Dead provides examples of: