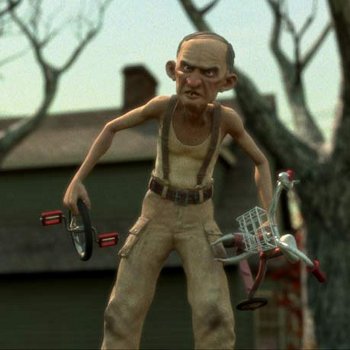 All the kids in the neighborhood know: if it ends up on his lawn, it doesn't exist.
"Ernesto, can you not see that I am busy getting upset about some kids across the street having FUN?!"
— Lord Boxman, OK K.O.! Let's Be Heroes
Advertisement:

Kids will be kids. They like to have fun and don't tend to give a lot of consideration to how adults feel about it. The entire world is their playground, pretty much, and they generally don't mean any harm, even when their playing gets out of hand. Most adults are understanding, or at least willing to be tolerant of kids getting a little rambunctious.

And then there's this adult. The one every kid in the neighborhood dreads.

Maybe they're a Child Hater, or they can't remember what it was like to have been young, or they have some other Freudian Excuse for their behavior. Whatever the cause, they feel that children should be seen and not heard, and that their fun is noisy, disruptive, dangerous, offensive, annoying, and otherwise undesirable. In their opinion, most other adults are far too lenient with those rotten little brats and let them get away with too much. While this Cranky Neighbor type can't control the whole world or even their whole neighborhood, they can and will exert complete tyranny over one area —their own lawn.

Any child whose toy or other plaything ends up on this adult's property — lawn, roof, backyard, pool — is in for a bad time; the Fun Hating Confiscating Adult will triumphantly declare something along the lines of "It belongs to me now!" and make off with the plaything in question, which may end up forgotten in a box in the garage, or put in a trophy room of sorts — or worst of all, thrown in the garbage. Such an adult may have a vicious Angry Guard Dog to chase away any children brave enough to try retrieving their belongings. (Curiously, nobody ever seems to think to just report the geezer to the police for Theft of Property.)

There's a Sadist Teacher variation too, who will snatch whatever they catch a student using that they disapprove of. Sometimes they will give it back at the end of the semester — or the school year. Sometimes they consider it theirs from that point forward. Such a teacher may have a sniveling suck-up student helping to point out targets.

The most common resolution to a plot involving this villain involves some Kid Hero or another hatching a plan to get in and get all the stuff back, returning it to its happy and grateful owners. Occasionally, the kids will run to a parent, and the parent will confront the confiscator.

The most common subversion to the trope tends to be when the kids finally work out a plan to get their stuff back, only to discover that the adult in question isn't actually fun-hating and hasn't actually confiscated it. In cases like this, it's most likely some kind of misunderstanding. They're usually just a Misunderstood Loner with a Heart of Gold, and they've just been holding onto it, waiting for the kids to come for it.

For practical meta-reasons, this trope is common to family and children's fare. The Media Watchdogs tend to frown on shows involving children facing the types of more serious and deadly dangerous villains that turn up in media targeting an older or adult audience. This trope allows both kid viewers and adult viewers to dislike the villain, as (a) they are showing disrespect to the child and the child's property, and (b) the parent is usually the one who paid for or gifted the child with the toy being confiscated.

When the Confiscator is old (and they usually are) expect to see such tropes as Screw Politeness, I'm a Senior!, When Elders Attack, and Grumpy Old Man as well. Compare Fantasy-Forbidding Father and The Killjoy. May overlap with Fun-Hating Villain if the Confiscator is a main antagonist. See also Threw My Bike on the Roof for a more general application of the same principle. If they are not exactly of the mean type, though, they may instead be an Indubitably Uninteresting Individual, forcing their way of life on others.