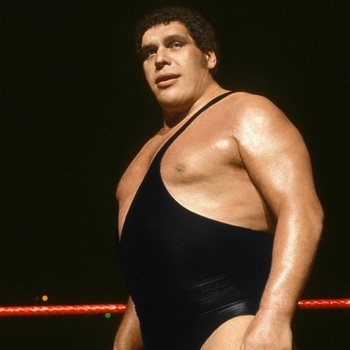 The Eighth Wonder of the World
"I know I have eaten more good food, drunk more beer and fine wine, had more friends, and seen more of the world than most men ever will."
Advertisement:

André Rene Roussimoff (Bulgarian: Андрей Рене Русимов; Polish: Andrzej Renat Russimow; May 19, 1946 — January 27, 1993) was a French professional wrestler of Bulgarian and Polish descent better known as "André the Giant" for his impressive size.note Billed at 7'4" (224 cm) and around 500 pounds (226 kg), to be precise; exact measurements are difficult to find, in part due to his slouching posture, and because no promoter at the time wanted an accurate measurement getting out and ruining his credibility. Most sources place him at or around 6'11"-7', possibly shrinking from that later in his career due to damage to his joints. You may also remember him as Fezzik in The Film of the Book of The Princess Bride.

During his tenure in the WWF (now the WWE), he was dubbed "The Eighth Wonder of the World" due to his frame, and held a fifteen-year undefeated streak in the company (with the exception of disqualification and count-out losses).note André had lost to The (Original) Sheik in Toronto in 1974, and to Antonio Inoki in Japan in 1986, but neither of these matches were included in WWE Canon. One of the most famous matches of his career was against Hulk Hogan for Hogan's WWF World Heavyweight Championship at WrestleMania III, where said streak ended.

Among his in-ring achievements, he is a former NWA Florida Tag-Team Champion