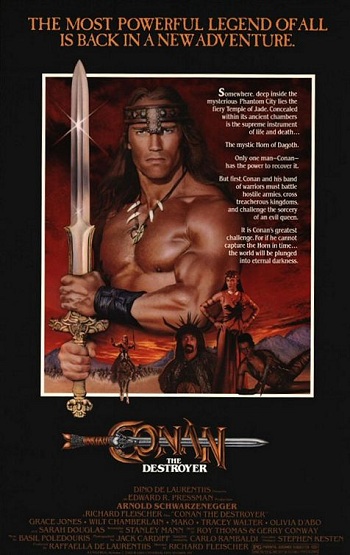 Conan the Destroyer is the sequel to Conan the Barbarian, released in the year 1984. Arnold Schwarzenegger and Mako return to reprise their respective roles.

Conan and his accomplice Malak are tasked by Queen Taramis to escort her niece Princess Jehnna to obtain an artifact needed to resurrect Dagoth, "The Dreaming God". Little does he know that the god in question will bring the age of darkness upon its resurrection, and the princess has to be sacrificed in order to do so.

Due to copyrights issues, a third Conan film, with the same director as Destroyer, became the Divorced Installment Red Sonja, with Schwarzenegger playing a character who officially wasn't Conan.

Conan the Destroyer provides examples of the following tropes: