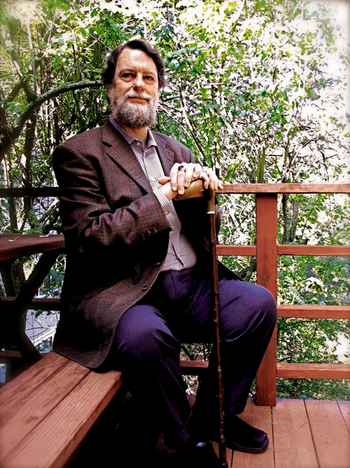 James Oliver Rigney, Jr. (October 17, 1948—September 16 2007), better known by his pen name of Robert Jordan, was an American author of epic fantasy, mainly The Wheel of Time series. He is also part of the posse of authors who wrote original Conan the Barbarian novels, and has written other novels under various additional pseudonyms.
Advertisement:

Jordan was born in Charleston, SC, and served two tours in Vietnam from 1968 to 1970 with the United States Army, for which he was awarded the Distinguished Flying Cross, the Bronze Star, and two Vietnamese Gallantry Crosses. After Vietnam he attended The Citadel and received an undergraduate degree in physics.

In 2006, Jordan was diagnosed with cardiac amyloidosis, and subsequently died on September 16, 2007.