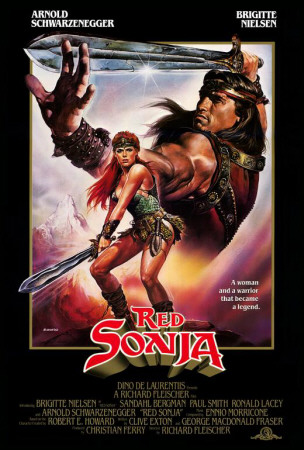 Sonja: No man may have me, unless he's beaten me in a fair fight.
Kalidor: So, the only man that can have you, is one who's trying to kill you. That's logic.
Advertisement:

Red Sonja is a 1985 film based on the Marvel comic book series, starring Brigitte Nielsen in the title role. Arnold Schwarzenegger also stars as Prince Kalidor (an expy of Conan the Barbarian).note Indeed, it was originally supposed to have been a third Conan movie (following Conan the Barbarian and Conan the Destroyer), but things happened... Ennio Morricone composed the soundtrack.

After the slaughter of her family and her rape by the men of the evil Queen Gedren, a young redhead woman named Sonja is empowered by a mysterious being so that she can seek revenge, and becomes a matchless sword-wielding warrior. She gets her chance when Gedren steals a powerful object named the Talisman (which only women can touch), and she is tasked to destroy it. She is joined in her journey by Lord Kalidor and the young Prince Tarn and his aide Falkon, who both are the remnants of a fallen kingdom.

A new live action Red Sonja project was in Development Hell for quite some time and eventually started filming in August 2022.