Film / Return to Me 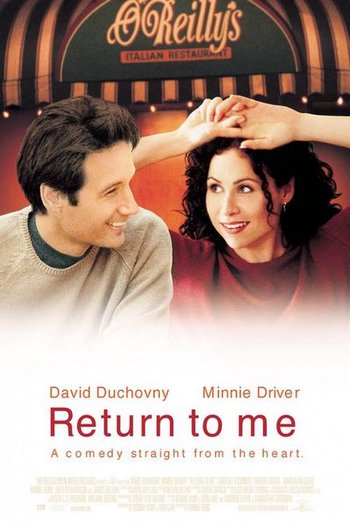 Bob Rueland (Duchovny), a Chicago architect, is married to Elizabeth (Richardson), a zoologist. After Elizabeth is killed in an auto accident, her heart is transplanted to artist Grace Biggs (Driver), who's near death from the congenital heart disease she's suffered since she was a teenager. Grace is grateful for the transplant and composes a letter to Elizabeth's grieving family thanking them, but can't bring herself to mail it. She's also reluctant to get into the dating scene, despite the urging of her friend Megan (Hunt), due to self-consciousness over the scar on her chest following the operation.

A year passes. Bob is grieving and lonely, prompting his friend Charlie (Grier) to set him up on a blind date. While the date itself does not go well, Bob finds himself attracted to the waitress at the restaurant. Who happens to be Grace, whom Bob has never met. And whose thank-you letter was finally sent and is sitting unopened at Bob's house. Hilarity, of the heartwarming variety, ensues.