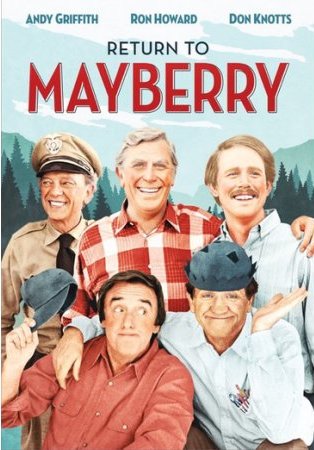 Return to Mayberry was a 1986 Made-for-TV Movie which reunited the cast of The Andy Griffith Show.
Advertisement:

In the film, Andy Taylor (Andy Griffith) and his wife Helen (Aneta Corsaut) decide to move back to Mayberry, with Andy planning to run for sheriff again. However, he declines when he finds out that Barney Fife (Don Knotts) is running, as he doesn't want to take that away from him. Meanwhile, hotel owner Wally Butler (Richard Linebacker) has enlisted the help of mountain man Ernest T. Bass (Howard Morris) in order to generate a hoax about a sea monster in order to drum up business. Barney believes the monster is real and tries to investigate, making him the subject of ridicule from his opponent and putting his election at risk, so Andy has to help bail him out by uncovering the truth behind the monster. In the end, Andy helps Barney expose Butler and Bass, saving Barney's reputation. After finding out that Andy was planning to run for sheriff, Barney drops out and endorses Andy, who returns as sheriff of Mayberry, with Barney as his deputy.