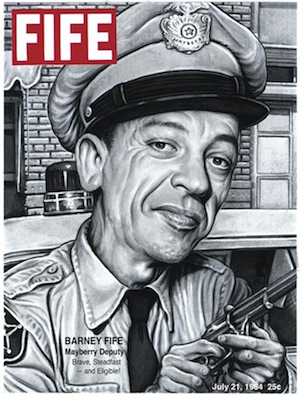 "I don't think actors get good training today. I put my training to use in everything I do."
Advertisement:

Jesse Donald "Don" Knotts (July 21, 1924 – February 24, 2006) was a highly respected comedic actor, best known for his role on The Andy Griffith Show as Barney Fife, a portrayal for which he won the Emmy Award for Best Supporting Actor five times.

Born and raised in West Virginia, Knotts served in the U.S. Army during World War II. He began his acting career on the soap opera Search for Tomorrow in 1953, though he first rose to fame as a recurring cast member on The Steve Allen Show. A long and fruitful association with Andy Griffith started when the two were cast in the Broadway play and film versions of No Time For Sergeants. After leaving The Andy Griffith Show, he starred in several comic films aimed at kids such as The Reluctant Astronaut, The Ghost and Mr. Chicken, and The Shakiest Gun in the West, later pairing with Tim Conway during The '70s in movies such as The Apple Dumpling Gang and The Private Eyes.

Later, he appeared in two episodes of The New Scooby-Doo Movies and on Three's Company as the landlord Ralph Furley, as well as reuniting with his old co-star Andy Griffith in several episodes of Matlock.