Series / The Many Loves of Dobie Gillis 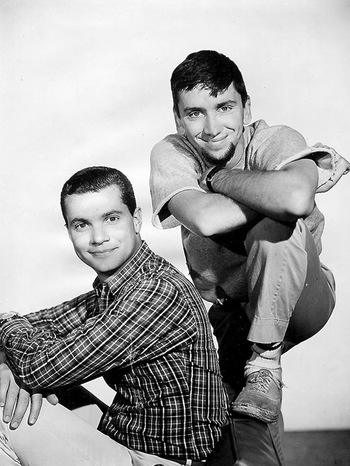 The Many Loves of Dobie Gillis was a Sitcom that ran for four seasons (1959–63) on CBS, based on a collection of short stories written in the early '50s by humorist Max Shulman (which had previously inspired the 1953 MGM musical The Affairs of Dobie Gillis, starring Bobby Van as Dobie and Debbie Reynolds as his love interest).

Dobie Gillis (Dwayne Hickman) was an Ordinary High-School Student who wanted simple things in life; money, respect, and the love of beautiful women. His best friend was an oddball beatnik named Maynard G. Krebs (Bob Denver), who sported a goatee and was allergic to work. Dobie perennially found himself pursuing beautiful girls who were rarely interested in him; meanwhile, his dogged childhood friend Zelda Gilroy (Sheila James) insisted she was destined to be his ultimate match.

The series broke a lot of new ground for television, being one of the first shows to have the characters comment directly to the audience, as well as featuring one of the medium's first "counter-cultural" characters in Maynard. It was also much more slyly scripted than a lot of shows of the era, and was noted for its rapid-fire dialogue exchanges.

Two of the show's best-remembered cast members only appeared in its first season: Warren Beatty (in one of his first roles as Dobie's chief rival, the handsome, rich Milton Armitage) and Tuesday Weld (as Dobie's primary dream girl, the blonde, money-hungry schemer Thalia Menninger).

The show's characters also served as an inspiration for the cast of another CBS show, the Saturday morning cartoon Scooby-Doo, Where Are You! (Dobie is Fred, Maynard is Shaggy, Zelda is Velma, and Thalia is Daphne).

In addition to reunion specials in the '70s and '80s, the series lived on in syndication and later on Nickelodeon's Nick at Nite block. There is more info on the show available here