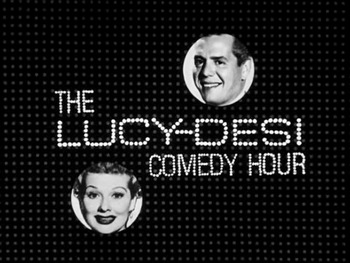 After I Love Lucy ended its run in 1957, the main cast — Lucille Ball, Desi Arnaz, Vivian Vance, and William Frawley — carried on with The Lucy-Desi Comedy Hour: essentially a series of hour-long I Love Lucy episodes (airing as monthly specials rather than a regular weekly series), with a greater emphasis on celebrity guests and exotic locations. Over the course of the specials, the Ricardos and the Mertzes encounter such stars as Tallulah Bankhead, Fred MacMurray, Betty Grable, Milton Berle, and Ernie Kovacs, and visit such locales as Mexico, Las Vegas, Sun Valley, Alaska, and Japan.

CBS aired 13 Comedy Hour shows between 1957 and 1950, the first five as standalone specials and the other eight as episodes of the Westinghouse Desilu Playhouse anthology.

Often seen in syndication under the moniker We Love Lucy, which splits each of the specials into two half-hour episodes (with the first ending on a To Be Continued). The DVD release boasted the title "I Love Lucy: The Final Seasons".