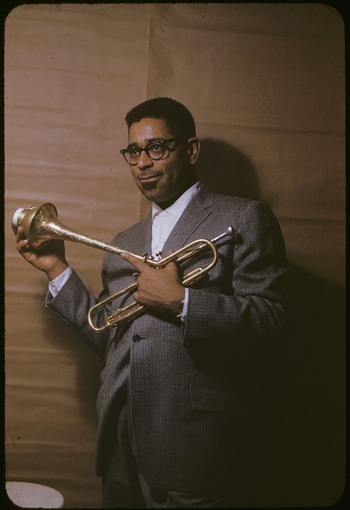 The Ambassador of Jazz
Advertisement:

John Birks "Dizzy" Gillespie (October 21, 1917 – January 6, 1993) was an American jazz musician, singer, and bandleader. A trumpet virtuoso, he utilized complex rhythms and harmonies with an innovative tone and devastating speed never see before in jazz which made one of the seminal artists of the bebop movement in jazz.

Later on, Gillespie would form his own orchestra in the late 1940s, and it was considered to be one of the finest large jazz ensembles. Noted for complex arrangements and instrumental virtuosity, its repertoire was divided between the bop approach—from such arrangers as Tadd Dameron, John Lewis, George Russell, and Gillespie himself—and Afro-Cuban jazz (or, as Gillespie called it, "cubop")—in such numbers as "Manteca" and "Cubano Bop"; featuring conga drummer Chano Pozo. Gillespie formed other bands sporadically throughout the remainder of his career, but he played mostly in small groups from the 1950s onward until his death in 1993.

His late 1940s look of a beret, horn-rim glasses, and a goatee also became the unofficial “bebop uniform” and a precursor to the beatnik styles of the 1950s. Other trademarks included his custom-made made bent-bell trumpet and his enormous puffy cheeks that ballooned when playing. He was also a noted composer whose songbook is a list of bebop’s greatest hits; “Salt Peanuts,” “Woody ’n’ You,” “Con Alma,” “Groovin’ High,” “Blue ’n’ Boogie,” and “A Night in Tunisia” have all become became jazz standards.

Gillespie had a few scattered acting appearances, including voice acting work in award-winning animated shorts The Hole and Voyage to Next. He composed the soundtrack to two films, The Cool World (1963) and Winter in Lisbon (1990); the latter represented his final studio recordings.

Albums by Dizzy Gillespie with their own page: