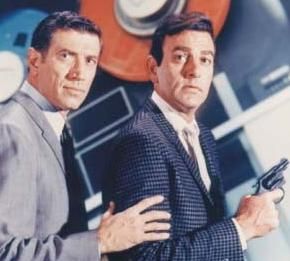 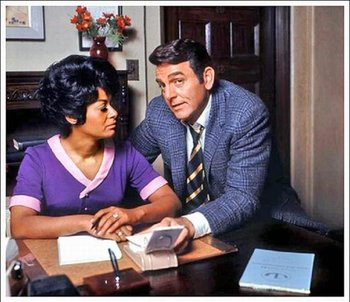 ...and with Peggy Fair.
Advertisement:

Mannix is an American Detective Drama television series starring Mike Connors as Private Detective Joe Mannix. Created by Richard Levinson and William Link (also known for Columbo and Murder, She Wrote) and developed by Bruce Geller (Mission: Impossible), it was the last show produced by Desilu Studios before its acquisition by Paramount. It ran from 1967 to 1975.The showrunners Ivan Goff and Ben Roberts would later create a popular detective show of their own.

During the first season of the series, Mannix works for a large Los Angeles detective agency called INTERTECT that utilizes state-of-the-art (for its time) computer equipment to solve crimes. As opposed to the other employees who must wear dark suits and sit in rows of desks with only one piece of paper allowed to be on their desks at one time, Mannix belongs to the classic American detective archetype; thus he usually ignores the computers' solutions, disobeys his boss's orders, and sets out to do things his own way, all the while outsmarting and mocking his superior, Lew Wickersham (Joseph Campanella).

To improve the ratings of the show, Desilu head Lucille Ball made some changes, making the show similar to other private-eye shows. Ball thought the computers were too high-tech and beyond the comprehension of the average viewer of the time and had them removed.

From the second season on, Mannix works on his own with the assistance of his loyal secretary Peggy Fair (Gail Fisher – one of the first African American actresses to have a regular series role), a police officer's widow. He also receives help from the Los Angeles police department, the two most prominent officers being Lieutenant Art Malcolm (Ward Wood) and Lieutenant Adam Tobias (Robert Reed). Other police contacts are Lieutenant George Kramer (Larry Linville), who had been the partner of Peggy's late husband, and Lieutenant Dan Ives (Jack Ging). In the second season, he also employs the services of a competitive private investigator, Albie Loos (Joe Mantell), as a sort of investigative gofer.

The series concluded after 8 seasons on an episode that did not give closure to the show. However, two decades later, Mannix would reappear in a Crossover with Diagnosis: Murder to solve the loose ends of "Little Girl Lost" in the episode "Hard-Boiled Murder", where Mannix finally makes good on his promise to Tina Reynolds to solve her father's murder despite growing older and developing an arterial blockage. This served as the backdoor finale to the adventures of Mannix and left him on a high note as he continued to pursue his detective work with a renewed sense of health and a healthy infusion of new casework to go home to. It also reveals Dr. Mark Sloan is the one responsible for treating Mannix's many injuries on the job all along, who must operate on Joe to save his life.