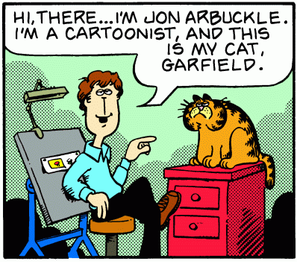 And so, on June 19, 1978, a very long history of shattering the fourth wall began.
"What?! What fourth wall?! There's never been a fourth wall in this stupid comic!"
— George, Bob and George
Advertisement:

And then there are these.

A series with No Fourth Wall doesn't just break the fourth wall, it vaporizes it. There might as well not be one. Characters will make references to "the last episode" or "next issue". They'll criticize the production, writing, management or even the audience. In extreme cases, they'll refuse to go on acting. Expect there to be large amounts of Medium Awareness, such as characters in a comic pointing out the use of panels. No Fourth Wall often leads to characters being extremely Genre Savvy, or frequent lampshading of Genre Blindness.

Still requires a Willing Suspension of Disbelief (unless you ACTUALLY believe the characters can see and hear you). See also Sliding Scale of Fourth Wall Hardness. Lampshade Hanging is a less extreme form of this trope.