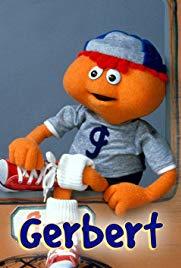 "I just gotta say I wanna spend my day with you!"
Advertisement:

Gerbert is a show about a chicken-nugget-shaped puppet child that teaches life lessons for children. In its first season, it was Religious Edutainment, however, its second season was a secular Edutainment Show. It aired on the Freeform (then the Christian Broacasting Network) from February 15, 1988 to December 25, 1991.