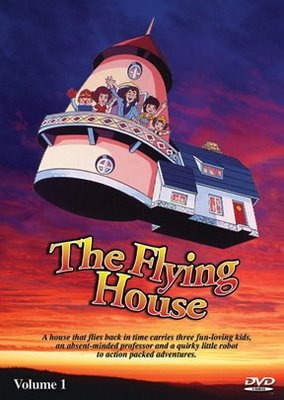 Flying House, full title: Time Classroom, Adventures of The Flying House, is a children's anime series produced by Tatsunoko Production with animation assistance by Studio Korumi, under directors Masakazu Higuchi and Mineo Fuji, and aired on the TV Tokyo networknote Which at the time consisted of only two stations, TV Tokyo and TV Osaka and other local stations across Japan. Originally airing from April 5, 1982, to March 28, 1983, the series culminates in 52 episodes. The series is part two of Tatsunoko's Bible trilogy, along with series one and two of Superbook. Like its sister show, it was also distributed in the United States by the Christian Broadcasting Network, airing both in syndication and on the old CBN Cable Network (now Freeform). All episodes are airing on TBN and its sister network Smile of a Child, and are available online at the Christian Broadcasting Network site.

The story of the anime consists of three young children—Justin Casey (Gen Adachi in Japanese), Angela Roberts (Kanna Natsuyama), and her younger brother Corky Roberts (Tsukubo), who discover what they believe to be an abandoned house in the middle of the woods while playing hide-and-seek. Inside, they soon discover SIR (Kandenchin)—a friendly little robot, and Professor Humphrey Bumble (Tokio Taimu)—an eccentric professor who had recently perfected a time machine. Using the time machine, the group go back through time, experiencing and reliving the past.

Tropes found in Flying House include: