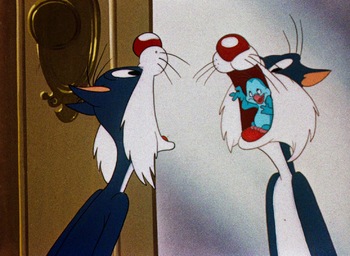 "Life with Feathers" is a 1945 Looney Tunes cartoon, directed by Friz Freleng.

It is notable as the debut of Sylvester the cat—and, unlike many other Warner Brothers cartoon characters who went through significant Art Evolution and/or Early-Installment Weirdness, Sylvester was born with his look, voice (supplied by Mel Blanc, of course), and personality fully-formed, right down to his "Sufferin' succotash!" catchphrase (though he wouldn't be paired with Tweety for another two years).

In this one, a lovebird is thrown out of his cage by his angry, violent wife. Despondent over this and feeling that there is no reason for a lovebird to live without love, the lovebird decides to kill himself. He resolves to get a cat to eat him, and picks Sylvester, who is scrounging for food in an alley. Sylvester initially leaps at the chance for an easy lunch, until he hesitates, thinking that it's too easy. He decides that the lovebird must be poisoned, and refuses to eat him. Darkly comic hijinks ensue as the lovebird, who is determined to die, keeps chasing Sylvester around and insisting that the cat eat him.

"Life with Feathers" provides examples of: