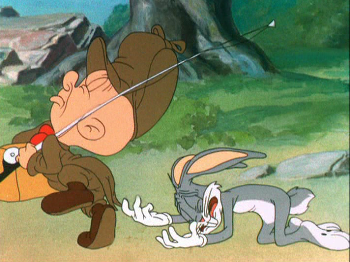 "The Big Snooze" is a 1946 Looney Tunes cartoon, directed by an uncredited Bob Clampett (along with some ghost-direction by a likewise uncredited Art Davis), starring Bugs Bunny. In this one, Elmer is chasing Bugs, as usual — but Elmer decides he's tired of being the Butt-Monkey, tears up his Warner Bros. contract, and quits the cartoon business. Elmer is happily snoozing under a tree when Bugs, panicked at losing his partner, decides to invade Elmer's dream to get Elmer to come back to work.

The last cartoon Bob Clampett made for Warners, and the last one he ever made to be released. One of The 100 Greatest Looney Tunes.

"The Big Snooze" provides examples of: