Theatre / I and You 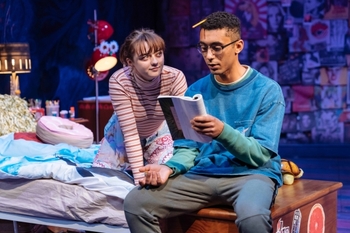 Caroline and Anthony, as portrayed by Maisie Williams and Zach Wyatt.

I and You is a play written by Lauren Gunderson, first preformed in 2013.

The play centers around high-school basketball player Anthony's attempt to enlist his classmate Caroline to help him complete his English assignment on Walt Whitman's book Leaves of Grass which he'd put off until the day before it was due. Caroline hasn't physically been to school in months due her failing liver, but due to her determination to finish school as normal Anthony is eventually able to persuade her to at least hear him out.

While Caroline is hostile and short-tempered, it quickly becomes apparent that she hasn't been able to interact with anyone but her mom and her doctors for longer than she cares to discuss, and that the stress of managing not only her rapidly declining health but her family's grief about it is wearing her down. As they work together the two slowly open up to other about their dreams and fears, as well as a private grief of his own that Anthony is carrying.

It won the 2014 Harold and Mimi Steinberg/American Theatre Critics Association New Play Award, and was a finalist for the 2014 Susan Smith Blackburn Prize.

I and You contains examples of: