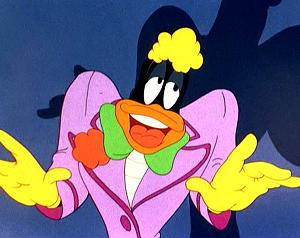 A 1945 (released in 1946) Looney Tunes short subject directed by Bob Clampett, "Book Revue" is a semi-remake of the 1938 Frank Tashlin short "Have You Got Any Castles?" (or a Genre Throwback to the "things come to life in a store" plot that was very common in early 30's cartoons). However, pop culture references are up-front and center this time, along with Clampett's trademark expressive distortions and caricaturing, as well as some very catchy music. Midway through the short, good old Daffy Duck appears and intrudes on the story of "Little Red Riding Hood" — and the fun really begins!