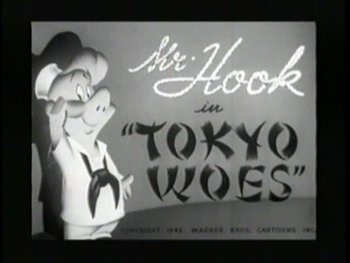 Tokyo Woes is a 1945 cartoon short produced for the US Navy, made as part of the short lived Mr. Hook series and directed by an uncredited Bob Clampett.

The film has a Japanese radio station, "Tokyo Rose", broadcasting anti-american propaganda and encouraging servicemen not to bother with war bonds. On a nearby battleship, Mr. Hook is going through his War Bonds when he hears the broadcast. Enraged, he responds with a missile shell containing a reply from a "talking bond," along with a number of explosive devices. Post-war, another shell lands on Hook, this time containing what is known as the "talking bond" giving all the benefits to his investments.