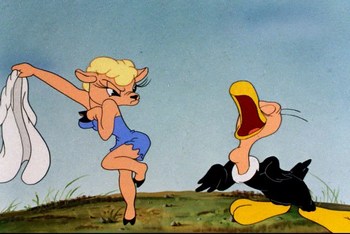 The Bashful Buzzard is a 1945 Merrie Melodies cartoon, directed by Bob Clampett and starring Killer (later coined Beaky Buzzard). Serving as a follow up to the previous short Bugs Bunny Gets the Boid, the cartoon follows the exact same premise, with the omission of Bugs Bunny, with Killer trying and failing to capture prey for his unimpressed mother.

This was the final Warner Bros short with voice work provided by Kent Rogers, who died shortly after production.