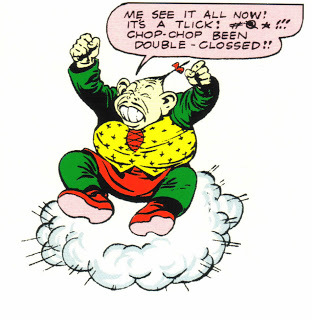 This is a trope about race that is now largely a Dead Horse Trope.

This trope is in play when an East Asian character (sometimes, but not always a recent immigrant) uses stereotypical mangled English, either for comedy or to establish their foreignness. Common mistakes they make in their English include:

Of course, this is a caricature—good luck finding a real East Asian immigrant who has all these traits! However, due to language differences, some Real Life immigrants may have some of these tendencies, and some of the trope's characteristics derive from Chinese Pidgin English

. If a foreigner who can speak perfect English deliberately speaks like this for amusement, this is Elective Broken Language.

May be used to have a character represent the Yellow Peril. Some either sloppy or racist (or both) works will have Chinese characters speaking Japanese Ranguage, even though the "L" initial soundnote in contrast with the rather different "L" final sound is very common in China and Chinese people have no problem saying it. Other common character types that use it include Asian Rudeness, Asian Store-Owner, Chinese Launderer, Japanese Tourist, and Mighty Whitey and Mellow Yellow. If due to a translation convention or error rather than deliberate characterization, it's "Blind Idiot" Translation instead of this trope. Subtrope of You No Take Candle. Compare Tonto Talk for the Native American version, and Stereotypical South Asian English for the South Asian version.

Compare with her song, Bali Ha'i;
Bali Ha'i will whisper
On the wind of the sea:
"Here am I, your special island!
Come to me, come to me!"
However, it may be worth nothing that other characters sing "Bali Ha'i" at other points in the play as well, so she may just be parroting a popular song, not making it up herself. Bloody Mary's song "Happy Talk" is much more of a piece with her dialog.

Shenhua can only speak in broken, thickly-accented English. But she's far from stupid, and when Revy calls her "chinglish", she's quick to brandish her blades and explain that she's "pure Taiwanese".

Shenhua can only speak in broken, thickly-accented English. But she's far from stupid, and when Revy calls her "chinglish", she's quick to brandish her blades and explain that she's "pure Taiwanese".