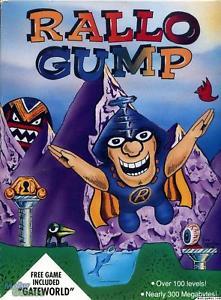 "It's like a child exploring the world for their first time."

Rallo Gump is a homebrew Platform Game for DOS PCs, created by Just SoftWorks, Homebrew Software (yes, there's a company by that name), and Edge Creations in 1994. It has many gameplay aspects borrowed from Super Mario Bros., Donkey Kong Country, and other popular platformers from the era.

The story takes place on the planet Gump at the center of the universe. The indigenous Gumps are pacifists unprepared for a sudden invasion by Mr. Glump Gump the 3rd and his army of Glumpites. It is up to the heroic Rallo Gump to rescue his family and his people from the Glumpites.

It is now Abandonware, and can be played online or downloaded here

The game includes tropes such as: