Film / The Wind and the Lion 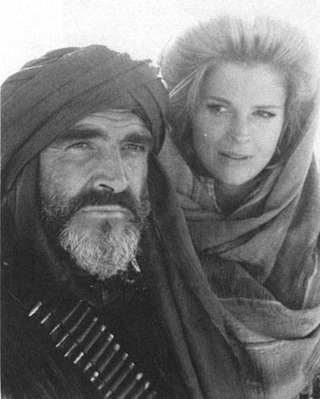 A 1975 Metro-Goldwyn-Mayer Action-Adventure film directed by John Milius, The Wind and the Lion tells a fictionalized version of the 1904 "Pedicaris incident

When an American woman, Eden Pedicaris (Candice Bergen), and her two children are kidnapped in Morocco by a Berber chieftain, Mulai Ahmed el Raisuli (Sean Connery), President Theodore Roosevelt (Brian Keith) sends warships and Marines, leading to an international confrontation. The film focuses on the personal conflict between Roosevelt and Raisuli, and on the romance between Raisuli and Mrs. Pedicaris.

The Wind and the Lion is a good old-fashioned high adventure. While it does not allow the beauty of the thing to be spoiled with obsessive accuracy, it features loving attention to period details, impressive set-piece action sequences, memorable acting and dialogue, and a sweeping musical score by Jerry Goldsmith.

This Film features examples of:

Teddy Roosevelt compares the United States to a grizzly bear.

Teddy Roosevelt compares the United States to a grizzly bear.