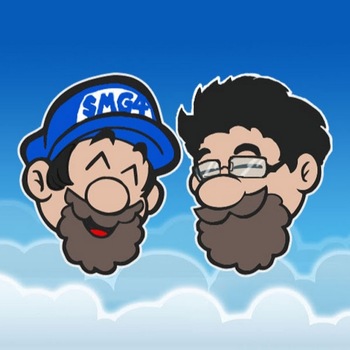 WA-HEY!note From left to right: Luke (SMG4) and Kevin.
"Welcome to the Glitchy Boy's gaming channel Hobo Bros! Where we play stupid crap. Mods, hacks, memes and bootlegs, if its weird, funny or awesome, we'll play it!"
—Their previous channel description
Advertisement:

is the YouTube channel of Luke Lerdwichagul (known to some as SMG4) and his brother Kevin. Most of their videos are Lets Plays of multiplayer games, especially those in the Super Mario Bros. series. They also enjoy multiplayer minigame modes of otherwise single player games.

On December 3, 2016, Luke uploaded a video on his SMG4 channel announcing the start of the Hobo Bros channel

. The channel had been started a few days earlier on November 28, but it wasn't until December 3 that they uploaded their first video, on Super Smash Bros, and they've been going strong ever since.

Their style is very informal and casual, with lots of emphasis on humor. Although there are some games that they take fairly seriously (mainly Super Smash Bros. games), they prefer to just screw around with their games and have fun. Most of the games they play are poorly made (intentionally or not), surreal, based around memes, and/or more.

They are also notable for coming up with an idea for a game that was later actually made, as well as creating their own epic miniseries in the form of The Carl Chronicles.

They also started Minus World, a group of Nintendo fan YouTubers who get together to play various games, particularly a multiplayer mod of Super Mario 64.

Starting in 2018, they started playing games less due to more focus on Meta Runner and other projects, and mostly react to meme compilations and, staring in early 2020, old SMG4 videos and SMG4 Wiki entries.

Starting in 2021, the channel has gone on hiatus for the foreseeable future, so that the duo can work on Glitch’s ever-expanding catalog of projects.

open/close all folders
Advertisement:
Games the Hobo Bros have played
Other video series they have

Tropes present in the Hobo Bros' videos include:

"We'll see you guys next time on Hobo Bros! Bye-bye!"