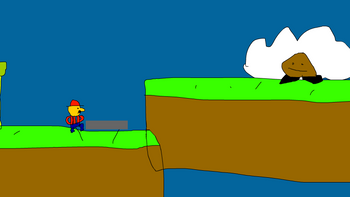 . In this game, Mayro must get past all the Gumbas, and possibly the "BIGER GUMBA". Due to its advanced graphics and high-quality soundtrack, Supra Mayro Bross has achieved memetic status and has spawned a few fan games of its own.

A spinoff titled Supra Mayro Kratt was released on Kongregate in 2012, playable here

A third upcoming Mayro game, titled "Supra Mayro 64," has been announced. Mayro needs to make his way through several "classic clevels reinmagine" in order to hhelp pesh's kingome, and possibly meet up with a speedy blue rival along the way.

Fanmade games of the series include:

Note that Supra Smash Bross is no longer a Mayro fangame due to being Screwed by the Lawyers, and has become a Smash Bros. parody instead.