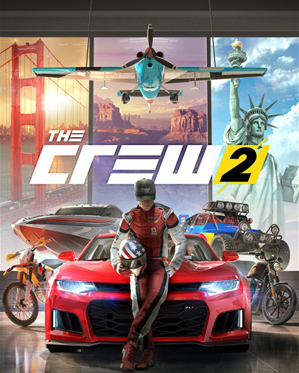 The Crew 2 is the 2018 sequel to The Crew, developed by Ivory Tower with help from Ubisoft Reflections, for PlayStation 4, Xbox One, and Microsoft Windows. It was released on June 29, 2018.

The continental United States returns as the setting of The Crew 2, but has been completely redesigned from the original. Compared to the first game's plot about being an undercover cop infiltrating a crime ring to avenge your deceased brother, the plot of this game is rather non-existent. Instead it focuses on motorsports, with the world being called MotorNation. There are four different motorsport families across the country: street racers, pro racers, off-road experts, and freestylers. They each have their own unique motorsport culture and set of disciplines.

In addition to cars, The Crew 2 features the return of bikes from Wild Run, and the addition of planes and boats. Later updates added new disciplines as well, such as hovercrafts and Demolition Derby. Hot Shots, the latest update, debuted on April 23 and marked the return of the "Summit" PvE festival from the first game's Wild Run expansion, as well as new cars.

The Crew 2 provides examples of the following tropes:

"Geez, it's kind of personal with this guy, isn't it?"
Alexis: "Clarence, you're just a sore loser."
Clarence: "No, I'm a great driver, as I'm about to show your former protege."