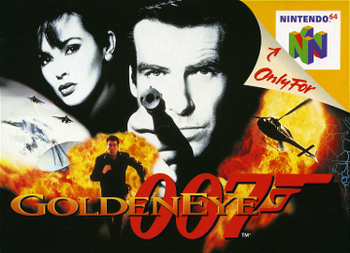 One of the best reasons to have an N64.* Also, wow, Pierce Brosnan's mouth is huge!
Advertisement:

The One With… a legacy of being a good licensed game.

GoldenEye is an FPS video game adaptation of the James Bond movie of the same name, made by Rare for the Nintendo 64 (known by some as GoldenEye 007, after the box art).