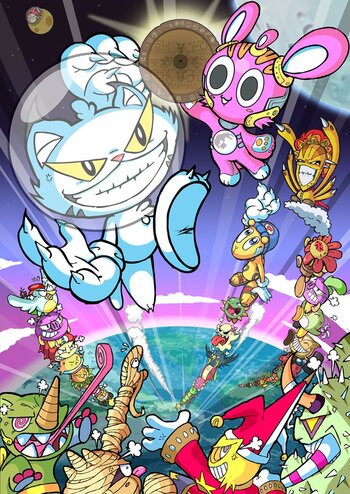 This game marks the creation of a new unique genre know as "chase-em-up", a combination of gameplay element from the platformer, puzzle, and maze game genres. Pac-Man, Flicky, Door Door and ChuChu Rocket! have been cited as the main inspiration for the gameplay mechanics.

The first game, Go! Go! Kokopolo - Harmonious Forest Revenge, was released for DSiWare on 2011. The story begins when Kokopolo and his friend Tatsumo have a nice calm moment. Meanwhile Jinbe, a friendly sky-guardian, flies across the sky while drumming a catchy tune on his mystical set of bongo drums. Unfortunately, one of the bongo drums dislodges by accident, and falls straight onto the napping Kokopolos head! Now pissed, Kokopolo catches a glance at the oblivious Sky Guardian, and vows to take revenge upon all the peaceful creatures upon the land, dragging poor Tatsumo with him.

A sequel, Go! Go! Kokopolo 3D ~Space Recipe for Disaster~, has been announced for Nintendo 3DS and is stated to be released sometime in 2017. In this game Kokopolo, Tatsumo, and Jinbe all travel to different worlds to try to a complete a space tablet, as it's been said that it would grant immortality.