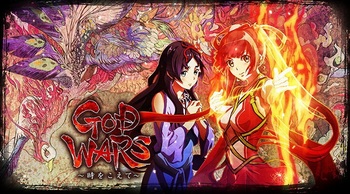 God Wars Future Past is a video game released for the PS4 and PS Vita in June 2017. It focuses on a group of adventurers who are looking for one of their members' mother. Said member, a princess named Kaguya, was originally intended to act as a Virgin Sacrifice in order to keep Mount Fuji from erupting, but was convinced not to. The basis for the game's story is Japanese Mythology.

The game is part turn-based-tactics, part RPG. Out of combat, you can assign roles to your characters and allocate points to those roles; in combat, up to six of them fight on a grid and move and act during their turn.

The "God Wars Team" at Kadokawa Games (now Dragami Games, after a corporate split) would go on to release Relayer, a mecha strategy game, in 2022. And while nothing concrete has been shown, a sequel to God Wars is one of the first projects stated to be in development by Dragami Games.