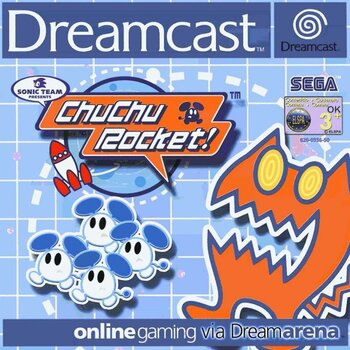 ChuChu Rocket! is a multiplayer video game by Sonic Team for the SEGA Dreamcast, later adapted for the Game Boy Advance and for iOS devices. The object of the game is to (for the most part) put little space-mickey-mice thinggies into four different-colored rockets to get them away from KapuKapus, i.e., cats. Basically it's a game of cat-and-mouse, IN SPACE!

According to the Excuse Plot, there are four individual pilots for the rockets:

The game employs arrows on a giant checkerboard that are to lead the ChuChus to the rockets. You get three arrows—no more, sometimes fewer. Occasionally the KapuKapus will show up and use the same arrows you placed to follow the ChuChus and eat them (this is actually the point of one of the mini-games). It gets much harder when you realize that the ChuChus go so dang fast that it's almost impossible to even see the dang things moving around. And that's assuming you're playing by yourself—it gets a lot more complicated when you use multiplayer (arguably the whole point of the game's existence) and there are four sets of three arrows littered over the board, which could potentially lead a KapuKapu to eat your ChuChus.

In 2019, the long-awaited sequel, ChuChu Rocket! Universe, was released for Apple Arcade.

Tropes associated with ChuChu Rocket! include: