Video Game / The World Is Not Enough 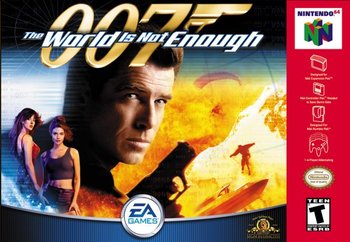 Bond is back.
Experience the world as Bond.
Advertisement:

Based on the 1999 James Bond film of the same name, The World is Not Enough is a video game released in 2000 by Electronic Arts for the Nintendo 64, PlayStation, and Game Boy Color.

This game is the fourth to feature Pierce Brosnan's likeness (though not his voice). The games more or less follows the same storyline as the movie, although liberties are taken for the sake of gameplay. The game itself is a first-person shooter similar to Rare's own James Bond game GoldenEye 007, although with a few notable differences, such as the inclusion of weapons with alternate functions, rendered cutscenes, full voice-acting (all of which were also in Perfect Dark, Rare's Spiritual Successor to GoldenEye 007) and the ability to jump, disarm enemies (although you need to use stunning weapons to do this, unlike in Perfect Dark) and swim.

Preceded by Tomorrow Never Dies and followed by 007 Racing.