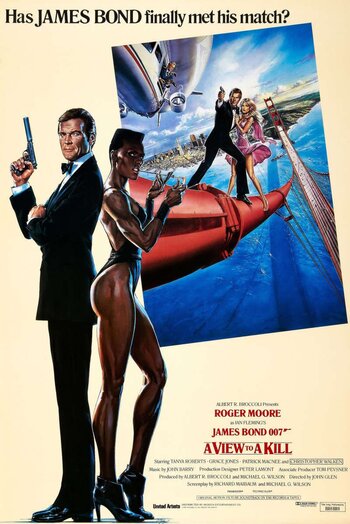 Dance into the fire, that fatal kiss is all we need...
Zorin: Intuitive improvisation is the secret of genius.
Bond: Herr Doktor Mortner would be proud of his creation.
Advertisement:

The one where Bond goes black...and never goes back, and teams up with John Steed.

A View to a Kill is the fourteenth James Bond film in the Eon Productions series, the third to be directed by John Glen and the seventh and final instalment to star Roger Moore. Also notable for being the final Bond film to feature Lois Maxwell as Moneypenny. The only thing this movie uses from the Ian Fleming short story From a View to a Kill (from the anthology For Your Eyes Only) are five words from the title and Paris as a setting. Duran Duran performed the Title Theme Tune which is, to date, the only Bond song to make it to number 1 on the US pop charts.note This song only made it to #2 in the UK, however. It took another 30 years for a Bond song to hit #1 in the UK. Sam Smith's "Writing's on the Wall" from Spectre not only reached #1, it debuted at #1.

After a Zorin Industries computer chip is found in Siberia, Bond is sent to investigate the company at a horse race competition. With the help of the geologist (and Girl of the Week) Stacey Sutton (Tanya Roberts), Bond finds out that the company's owner, Max Zorin (Christopher Walken as a shamelessly over-the-top villain) and his lover May Day (Grace Jones as one of the most genuinely intimidating henchwomen of the series), plans to destroy California's Silicon Valley to ensure he has the monopoly on the production of computer chips.

Preceded by Octopussy and followed by The Living Daylights with Timothy Dalton succeeding Moore as Bond.