No MacGuffin, No Winner 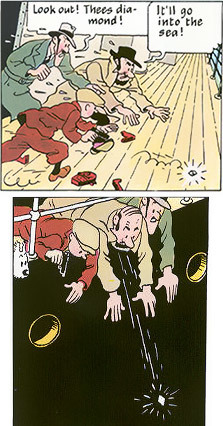 Occasionally used for An Aesop: when two or more children are fighting over something in Real Life, the parents will often punish the kids by taking the thing they were fighting over away, meaning that nobody gets it. If it's an item, the parents will lock it away, or sometimes even give it away. If it was an event, the parents will call it off. This kind of punishment carries over to television, where the futility of a fight is often demonstrated by having it turn out to have been in vain, with the goal taken away at the last minute or destroyed by the fighters themselves in the heat of the battle. In-universe, this will often work amazingly well as a lesson where, after a few moments of lying in the dirt together, the two former enemies will be inviting each other for drinks, no longer having a reason to fight, the whole business now a shared memory to look back on and laugh at. In real life, not so much — because, of course, it was the other kid's fault for starting the fight in the first place. Compare Nice Job Breaking It, Rivals!.

Note that invoking this can be a very bad idea, doing this for children in petty squabbles is one thing, but if you do it in a more serious situation on hardened Badasses... They might turn their weapons on you.

Since writers often want to avert an ending where The Bad Guy Wins, this trope is perfect insurance against having an ending that is seen this way: The Big Bad may be the obvious winner in terms of who kicked whose ass, and the hero may be suffering some kind of loss, which is really nothing to be happy about. But at least the villain is unsuccessful in that he hasn't made himself any richer or made any progress toward taking over the world. Which was really the whole point anyway. In fact, this "win" over the hero may have doomed his own plans now that the MacGuffin is gone.

The lost object is often (but not always) a MacGuffin; it isn't a MacGuffin if it did something else before being lost. Status Quo Is God is often the motive behind this trope, especially in those cases where keeping the MacGuffin would have a major effect on the work. If I Can't Have You… is the Love Triangle equivalent. See also "Shaggy Dog" Story, where the object was never important after all... and Shoot the Shaggy Dog, when the characters' lives are lost in the process. If one side can claim a "victory" by doing this, it overlaps with We Win, Because You Didn't.

Compare Judgment of Solomon, when an impartial mediator threatens this in order to resolve the dispute, Tear-Apart Tug-of-War, where a non-MacGuffin item gets broken or ripped, and No Man Should Have This Power, when one side chooses to destroy the object to prevent the enemy from getting his or her hands on it.