Film / Tintin and the Golden Fleece 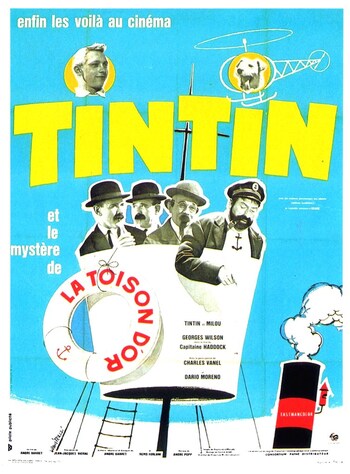 Tintin and the Golden Fleece (in French:Tintin et le mystère de la Toison d'Or), is a Live-Action Adaptation of the famous Tintin comics. Released in December of 1961, it stars Jean-Pierre Talbot as Tintin, and Georges Wilson as Captain Haddock. It isn't based on any of Hergé's stories, instead having a completely original story. However, it does retain the feel of said stories, and many of the tropes found in the comics are also present here. The movie was adapted for print in the style of one of the comic strip albums, using live-action shots with speech bubbles.

One morning, Captain Haddock's nap is interrupted by the announcement that his friend, Themistocle Paparanic, has passed away, and as part of his will, Haddock has inherited his ship, the Golden Fleece. Tintin and Haddock travel to Istanbul, Turkey, to retrieve the ship, but find that it's a rusty, dilapidated shell of its former glory. More surprisingly, a businessman named Anton Karabine offers to buy the rusty old ship for a very large sum of money, and soon turns to violence when his offers are refused. Tintin must search for Paparanic's old crew, and along the way learns of a hidden fortune in gold which he has hidden.

The movie got a sequel in 1964, Tintin and the Blue Oranges.