Film / Through a Glass Darkly 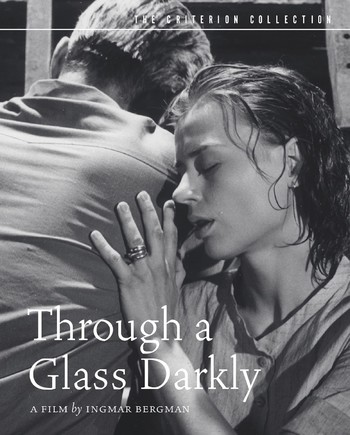 Through a Glass Darkly is a 1961 film directed by Ingmar Bergman, starring Harriet Andersson and Max von Sydow.
Advertisement:

Four people are spending summer vacation on Sweden's Faro Island.note This is the first of seven films that Bergman shot on Faro, where he eventually bought a house Martin (von Sydow) is a doctor, married to Karin (Anderson). Also on the island are Karin's brother Minus, a 17-year-old ball of hormones, and David (Gunnar Björnstrand), Karin and Minus's father, who is a writer and is rather distant from his children.

What starts off as a rather unexceptional day by the seashore is soon revealed to be darker. Minus resents David's lack of interest in him. Karin, as it happens, has a far worse problem: she is suffering from schizophrenia. She has been sent home from the hospital after receiving shock treatments that have temporarily helped her get a better grasp on reality, but her condition is essentially incurable.note In Real Life chloropromazine had just recently been introduced as a medication for schizophrenic hallucinations. Karin's illness, besides causing her to suffer from visual and auditory hallucinations, has also caused some distance in her relationship with her husband, as she no longer feels sexual desire.

Over a period of roughly a day, Karin suffers a major relapse. Her illness causes her male relations to question their own lives and their relationships with each other.

Through A Glass Darkly won the 1962 Academy Award for Best Foreign Language Film.