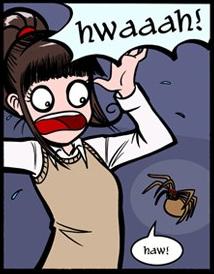 Some people are scared of spiders. Whenever they see a spider, they will become scared, either screaming in horror or trying to swat the spider with a rolled-up newspaper or stomp it to death if it's on the floor.

Essentially, this trope is when spiders are portrayed as being scary monsters in different forms of media. Sometimes, they can be giant monsters in horror movies, while they can be normal-sized, yet still retain the scariness that they are thought to have.

They're often portrayed as extremely venomous, capable of killing or incapacitating humans. This happens occasionally in Real Life and near constantly in stories. In these instances, the sight of a creeping spider is comparable to that of an approaching cobra or tiger. If anthropomorphic, they may be portrayed as more sneaky and manipulative. They may be Evil Puppeteers, due to the resemblance between a spider's webbing and a puppet's strings.

In reality, while there are indeed a number of deadly spiders on Earth, most of them are more likely to be found in relatively "remote" or exotic regions, such as Australia or Brazil—and even there, most spiders are harmless, and not all areas have particularly venomous spiders.note For instance, the most dangerous spider in the Australian state of Victoria is the redback, which like its North American cousin the black widow will make your life miserable for a few days but won't kill you unless you're a child or already weakened by something else. In America, the most notorious deadly spiders are the black widow and the brown recluse, and the very name will have an air of death and apprehension. In reality, both of these spiders are extremely docile, and their bites are rarely serious — most fatalities are children or people with weak immune systems.

In lieu of either of these spiders, however, the spider most likely to be used to inspire fear and revulsion is one of a wide variety of tarantula species. Despite being relatively harmless to humans, their size and appearance is a grade of Nightmare Fuel all by themselves. Even when a spider really is dangerous to humans — such as the Sydney funnel web or Brazilian wandering spider — they won't aggressively attack people under normal circumstances (see Animal Assassin for more information). The former, in fact, has 13 total confirmed deaths to its name

— all prior to the introduction of antivenom in 1981.

In reality, more people are killed each year by champagne corks or falling vending machines than spiders. A rather unimpressive record compared to, say, bears, crocodiles, venomous snakes, or even canines or sharks. However, those animals all have two eyes, internal skeletons, and red blood. When it comes to narrative effect, otherness is always scarier than practical threat.

Compare Creepy Camel Spider, Giant Spider, Spider Swarm, Sneaky Spider, Scary Scorpions and Why Did It Have to Be Snakes?. Contrast Friend to Bugs, for someone who might love spiders, and Friendly Neighborhood Spider, for the opposite depiction of these animals.

Not to be confused with Demonic Spiders, which is a gameplay trope, though the two can certainly overlap.

Blu Gets A Spider On His Back

Blu gets a spider on his back while he and Jewel are walking through Tijuca Forest much to Jewel's annoyance though she brushes it off of him and unconvincingly tries to claim that it's just a leaf.

Blu Gets A Spider On His Back

Blu gets a spider on his back while he and Jewel are walking through Tijuca Forest much to Jewel's annoyance though she brushes it off of him and unconvincingly tries to claim that it's just a leaf.