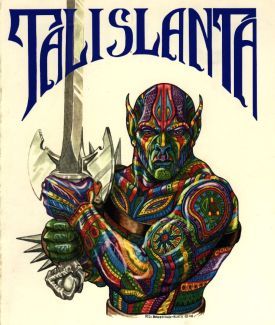 It's been called "the Rasputin of RPGs".

It has literally hundreds of unique character concepts... and that's just going by base templates.

It's inspired by the fiction of Jack Vance.

Its tagline is "No Elves".

To be more descriptive, Talislanta is a Table Top RPG created by Stephen Michael Sechi and published by Bard Games. First releasing in 1987, Talislanta has been steadily chugging along for 6 editions.

Taking place on the titular continent, Talislanta turns players loose into a world inspired by (among other things) the Dying Earth series and H.P. Lovecraft's Dreamquest Of Unknown Kadath. Which means players and gamemasters ought to expect a suprise or two. Oh, and there's No Elves.

In 2010, Sechi released all of the Talislanta books under the Creative Commons License, and they are now available free to download at the Talislanta Website