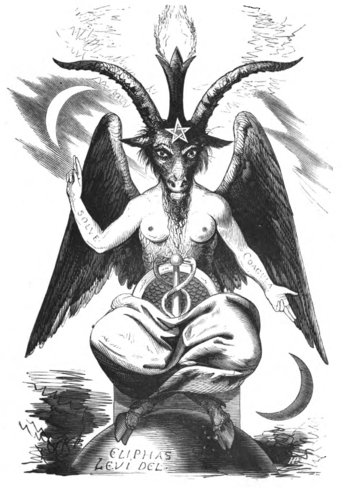 Baphomet is one of the more infamous of the Demon Lords and Archdevils; a goat-headed, triple-horned, black-winged figure with both male and female features. When he appears in fiction, he is usually pure evil, and frequently a direct stand-in for Satan. He generally has cults following him who really go in for magic circles and pentagrams. It's not too uncommon to fight him as the final boss in a video game.

His origins go back to the First Crusade, where the Muslim defenders frequently called out to The Prophet Muhammad. The crusaders, not understanding (and not really caring), reported this under various mishearings as some sort of idol or demon, and often filled in sinister details of their own invention to make the Muslims look as evil as possible. The "Baphomet" spelling that became standard is first mentioned in a letter by the crusader Anselm of Ribemont.

He rose to further attention in the early 1300s, when King Phillip of France decided that the easiest way to settle his debts to The Knights Templar would be to disband them and seize their wealth. To facilitate this, he cooked up lurid stories of the Templars worshipping Baphomet and engaging in various sinister rituals, then tortured their leaders into confessing. The Masons have also often been accused of worshipping him during bouts of anti-Masonic hysteria.

The standard image of him shown in the picture was created by Eliphas Levi in 1856, who reimagined him as the "Sabbatic Goat," a dualistic figure of binary opposites not

related at all to Satan except in looks. Aleister Crowley subsequently adopted Baphomet into his cosmology, and various occult and neo-pagan groups today often have some place for him in their belief systems, often giving him a Satan Is Good interpretation.

The Grim Creeper lurks in the depths of the world born from Iben's heart, embodying her warped emotions. He attacks with sharp, sword-like icicles and a freezing chill.

The Grim Creeper lurks in the depths of the world born from Iben's heart, embodying her warped emotions. He attacks with sharp, sword-like icicles and a freezing chill.