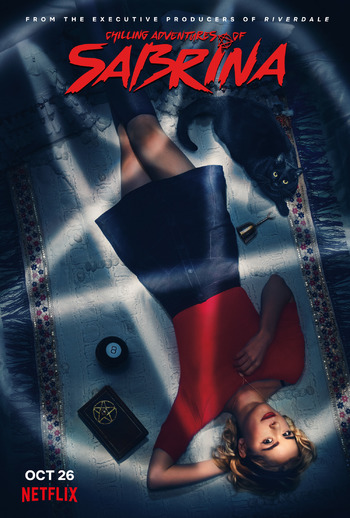 Chilling Adventures of Sabrina is an American supernatural television series based on the comic book series of the same name. Just like its namesake, the series is a darker retelling of the long-running Archie Comics title Sabrina the Teenage Witch. It is the second live-action series based on Sabrina, following the 1990s sitcom. In this adaptation, Sabrina Spellman must reconcile her dual nature as a half-witch, half-mortal while fighting the evil forces that threaten her, her family, and the daylight world humans inhabit.

The series was created by Roberto Aguirre-Sacasa originally as a companion series for Riverdale, but it was later acquired by Netflix and developed for them by Warner Bros. Television and Berlanti Productions, with the first two seasons being shot back to back. Following a successful launch, two more seasons were ordered.

The first half of the second season, listed as the series’s 3rd part, was released on January 24, 2020. The second half, listed as the series's 4th part, was released on December 31, 2020 and served as the series' final season. Aguirre-Sacasa has stated he intends to bring the series back in some form after Netflix's exclusivity window on the title expires, while a comic book continuation titled The Occult World of Sabrina was announced in July 2021. In October 2021, it was revealed that Shipka would be appearing in the sixth season of Riverdale as Sabrina in a crossover episode, which has been said to connect with the aforementioned comic series.