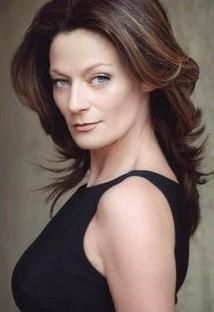 If you're thinking of editing this page, say something nice...
"It's not lost on me how huge it is to change gender for the Master. It's a huge honour and one I intend to savour every moment of."
— Michelle Gomez on playing Missy
Advertisement:

Michelle Gomez (born 23 November 1966 in Glasgow, Scotland) is a Scottish actor, currently residing in New York. She's best known as Missy, a female incarnation of the Master in Doctor Who. Other TV roles include The Book Group, the unforgettable Ms Pickwell in Bad Education and Mary Wardwell/Madame Satan in Chilling Adventures of Sabrina. She also played psychotic hospital administrator Sue White in Green Wing and joined season three of Doom Patrol (2019) in 2021.

She has been married to fellow actor Jack Davenport (from Coupling and Pirates of the Caribbean) since 2000 and also has a son, Harry, who was born in 2010.

Fun fact: She shares her birthday

with the anniversary of Doctor Who - November 23.