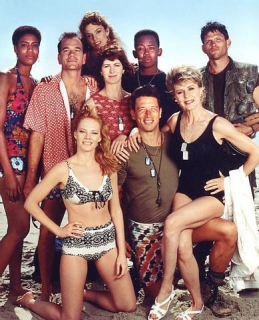 The series that brought women to the front line.

Through the mirror of my mind...
Advertisement:

China Beach was a War/Medical Drama that ran on ABC from 1988 to 1991. It featured a group of characters serving at the real China Beach Rest and Recreation (R & R) station and the fictional 510th Evacuation Hospital during The Vietnam War.

The show was unique, focusing on the experiences of women serving in and around a combat zone. Real Vietnam veterans, particularly nurses who had served, complained at first that plots focused too much on the romantic lives of the characters and, in that respect, were extremely unrealistic. This led to later seasons being more medical/combat based, with romantic entanglements relegated more to innuendo and subplots.

The show also followed characters who survived the war back to America, showing their struggles to return to "normal" society. It dealt with traumas that haunted returning veterans, from main character Colleen McMurphy's drinking and psychological problems stemming from the things she saw as an Evac hospital triage nurse to Marine-turned-lifeguard Boonie Lanier dealing with the loss of his leg.

The show was popular with critics and had a devoted fanbase but was consistently low-rated. Its cancellation, however, has been said to have less to do with ratings than with the fact that, at the time, America was fighting to liberate Kuwait in The Gulf War, and the show's distinctly anti-war view clashed with the national sentiment of the day.

The series pilot was going to premiere on ABC after Super Bowl XXII, but because it was a 2-hour presentation with commercials, this was reversed, because if the game had run long enough, there were concerns that the pilot would conclude its broadcast after midnight. Instead, ABC premiered The Wonder Years after the game, a series which also takes place during the time the Vietnam War raged, making several references to it during the series, including at the end of the pilot where it is revealed that a main character's relative was killed in action during the war. Coincidentally, China Beach had an episode named "With a Little Help from My Friends" after The Beatles song of the same name, the version by Joe Cocker was the opening theme to The Wonder Years.