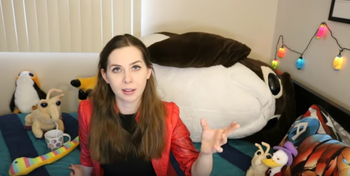 So... Jenny Nicholson a Web Original creator, once known for heading Friendship is Witchcraft, currently running her own YouTube channel of the same name. After posting infrequent miscellaneous videos from as early as 2011, she started gaining traction around 2016 after she began making videos talking about mainstream film and TV show franchises, such as The Avengers, My Little Pony: Friendship Is Magic, and Star Wars, all with a unique sense of deadpan humor and often with her cosplaying as a character in whatever the video is about.

Her videos vary on whatever she feels like doing, with her subjects and style alternating frequently. In addition to directly discussing films or shows — either recent ones she just saw or older ones she has a deeper thinkpiece on — she also does skits as characters acting out humorous takes of their respective works, riffs on fanfiction or other obscure literature, and more.

. Her Patreon can be found here

Tropes displayed by Jenny Nicholson, (not) arranged as a numbered list:

Jenny is taken aback when she stumbles upon the term "cliff notes" in a sci-fi novel.

Jenny is taken aback when she stumbles upon the term "cliff notes" in a sci-fi novel.