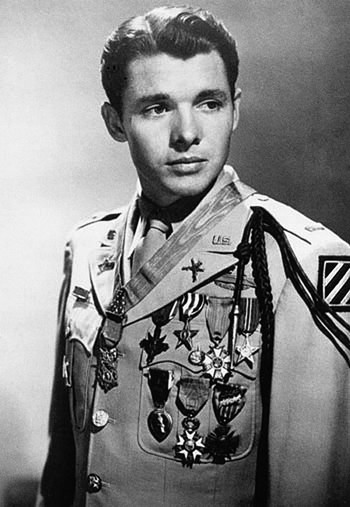 The most decorated soldier in the American Army. Good. We can put our Christmas presents under him.
If there'd be any glory in war,
Let it rest on men like him.
—Sabaton, "To Hell and Back"
Advertisement:

Born in rural Texas, he was the sixth out of twelve children in a poor Scots-Irish family reputed to have Cherokee ancestry. Two of his siblings died before reaching adulthood. As the eldest boy still living at home when his father deserted the family, he was forced to support his mother and younger siblings, by various odd jobs and sustenance hunting. He could kill small, fast-moving targets like rabbits and squirrels with a slingshot, which already says a lot about his marksmanship skills, but he proved even better with a light .22 rifle. Due to the poverty of his family and the fact that the people who tried to help them out were not much better off, he often had to go out hunting with only a single cartridge in his gun. If he didn't kill something edible with his first shot, his family would go hungry. When his mother died, he was obliged to put his youngest siblings in an orphanage, but he dreamed of earning enough money to reunite the family and provide for them.

When Pearl Harbor was attacked, he tried to join the US Army, but was turned down for being underage. He tried again, this time to all three branches plus the paratroopers and Army Air Corps, lying about his age using an altered birth certificate. He was turned down by the Marines, Air Corps, and Paratroopers for being too short, and by the Navy for being underweight. The Army, however, finally accepted him. During training at Fort Meade, he passed out in a drill exercise; his commander tried to have him transferred to cooks' school, but he wouldn't have any of that.

His first taste of combat was in Sicily, killing two Italian officers as they tried to escape, gaining him a promotion to Corporal. It was in Sicily that he contracted malaria, which would afflict him throughout the war. He continued to receive promotions on the Italian mainland, first to Sergeant after killing three German soldiers and capturing several others when ambushed during a patrol, and again to Staff Sergeant at Anzio when his best friend, Lattie Tipton, was killed by a German machine gunner pretending to surrender, sending him into a rage, killing the entire machine gun crew that killed his friend, then comandeering their machine gun and grenades, turning them on nearby German positions, and destroying anything not wearing the right uniform. Then he went back to Tipton's body to keep watch over it, and completely shut down until the medics came to take the body away. His attack on the Germans earned him the Distinguished Service Cross, second only to the Medal of Honor, and made him Platoon Sergeant. In later years, Murphy often lamented that all his friend Tipton got out of that action was a wooden cross above his grave, and Murphy is reputed to have given his DSC to Tipton's daughter in memory of the event. His division sustained 4500 casualties after entering France, and he was eventually given a field commission to 2nd Lieutenant and made platoon leader, during which he received two Silver Stars.

The action that earned him the Medal of Honor occurred January 26, 1945, in Holtzwihr, during the liberation of Alsace (Eastern France). Murphy's company was reduced from 128 to 19. The Germans had also knocked out all but six of the M10 Tank Destroyers supporting his company. Murphy sent his remaining men to the rear while he kept firing at the Germans with his M1 Carbine until he ran out of ammunition, then climbed aboard an abandoned and burning M10 (with a full fuel tank and ammo rack, and presumably about to explode), using its M2 .50 caliber to obliterate an entire German company, using a land phone to direct artillery fire, falling back only when his communications line was cut. He then led his men in a counter attack, driving the Germans from Holtzwihr. He was promoted again to First Lieutenant a month later. When he was asked later what it was like on that burning tank, Murphy would respond that "it was the only time that winter that my feet were warm."

His Medal of Honor citation reads:

Rank and organization: Second Lieutenant, U.S. Army, Company B 15th Infantry, 3rd Infantry Division.
Place and date: Near Holtzwihr France, January 26, 1945.
Entered service at: Dallas, Texas. Birth: Hunt County, near Kingston, Texas, G.O. No. 65, August 9, 1944.
Citation: Second Lt. Murphy commanded Company B, which was attacked by six tanks and waves of infantry. 2d Lt. Murphy ordered his men to withdraw to a prepared position in a woods, while he remained forward at his command post and continued to give fire directions to the artillery by telephone. Behind him, to his right, one of our tank destroyers received a direct hit and began to burn. Its crew withdrew to the woods. 2d Lt. Murphy continued to direct artillery fire, which killed large numbers of the advancing enemy infantry. With the enemy tanks abreast of his position, 2d Lt. Murphy climbed on the burning tank destroyer, which was in danger of blowing up at any moment, and employed its .50 caliber machine gun against the enemy. He was alone and exposed to German fire from three sides, but his deadly fire killed dozens of Germans and caused their infantry attack to waver. The enemy tanks, losing infantry support, began to fall back. For an hour the Germans tried every available weapon to eliminate 2d Lt. Murphy, but he continued to hold his position and wiped out a squad that was trying to creep up unnoticed on his right flank. Germans reached as close as 10 yards, only to be mowed down by his fire. He received a leg wound, but ignored it and continued his single-handed fight until his ammunition was exhausted. He then made his way back to his company, refused medical attention, and organized the company in a counterattack, which forced the Germans to withdraw. His directing of artillery fire wiped out many of the enemy; he killed or wounded about 50. 2d Lt. Murphy's indomitable courage and his refusal to give an inch of ground saved his company from possible encirclement and destruction, and enabled it to hold the woods which had been the enemy's objective.

For all his actions, he was awarded every decoration for valour available to US Army ground troops at the time, four French decorations and the Belgian Croix de guerre, as well as the Combat Infantryman Badge, Marksman Badge with Rifle Bar and Expert Badge with Bayonet Component Bar.

After the war, he helped his family get back on their feet, became a training instructor with the Texas National Guard during the Korean War, wrote an autobiography, To Hell and Back

, and started a movie career, eventually making his autobiography into a movie in 1955. It became the highest-grossing film Universal Studios had made up to that point, and remained so until the release of Jaws nearly twenty years later. To Hell And Back proved surprisingly popular in Japan, perhaps due to the main character's warrior ethos and family loyalty. He appeared in a total of 44 films, mostly b-westerns that traded on the Memetic Badass status he held in the minds of his own generation, and their children, the baby boomers.

He had always loved horses, and used the proceeds from the film version of his autobiography to buy a ranch where he could breed racing Quarter Horses. He made friends with a number of policemen, and became involved in the war on drugs after visiting a cocaine addict's home with a police friend and seeing the addict's two small daughters playing on the dirty floor with no one to look after them.

The filming of Guns of Fort Petticoat sums up his post-war life pretty well. He not only produced and starred in this film, about a cavalry officer who goes rogue in order to teach a group of women how to fight off an Indian attack, he also trained the actresses in real life for the task, using his experience in the Army and the Texas National Guard to teach them gun safety and formation drills. On the side, he worked as an undercover narcotics agent, helping bring about some twenty convictions. He also rescued an abused German Shepherd puppy by buying it from its cruel owner.

In The '60s, he starred in a short-lived TV series called Whispering Smith, about a forensics-minded lawman in 1870s Denver. Murphy usually described it as "Dragnet on horseback," but it ran into controversy over its slightly Darker and Edgier treatment of frontier-era Denver and over a disturbing episode involving a widow who abuses her adult son (a very young Robert Redford) with a whip. Murphy's film westerns of this period were also somewhat Darker and Edgier, although they were still pretty idealistic compared to the rising tide of Spaghetti Westerns and revisionist Westerns bent on Deconstruction or just violence and grimdarkness for their own sake. He appeared in an Israeli James Bond knockoff, where his folksy, low-key attitude sort of accidentally deconstructs the Tuxedo and Martini school of spy movie without quite pushing things into Stale Beer territory. He co-wrote some moderately well-known Country Music songs, including Shutters and Boards, When the Wind Blows in Chicago, and Was It All Worth Losing You? He also advocated for sufferers of PTSD. He too suffered from PTSD, and his doctor prescribed Placidyl to help him sleep. He discovered that he had become addicted to the drug. Instead of any orthodox treatment, such as weaning off or therapy, he went another route: he rented out a hotel room, locked the door, and went cold-turkey for an entire week to get off the addiction.

He was tried for attempted murder in 1970, after getting into a fistfight with a massive, six-foot-three man who trained guard dogs for a living. In the course of the trial, it was discovered that the dog-trainer had abused a German Shepherd belonging to a female friend of Murphy. The trainer had also groped and verbally abused the woman when she protested. Unsurprisingly, Murphy was acquitted. His defense was, "If I wanted to kill you, you'd be dead," and anyone familiar with his war record (which would be most of the free world) knew he was perfectly capable of backing it up. Several members of the jury shook his hand after the verdict was handed down. It is not clear whether they were fans of his film work, or just liked his tendency to Pay Evil unto Evil.

He died May 28, 1971, when the private plane he was riding in crashed in Virginia. It seems strangely fitting, given his patriotism and war record, that his body was recovered from the wreckage on Memorial Day of that year. According to an obituary in TIME magazine, he was relaying information about the mafia to the Los Angeles DA's office in the last months of his life. He was buried with all honors at Arlington, and his gravesite is the second most visited grave, after JFK's, of a named individual at Arlington. He is the namesake to the VA (Veterans' Administration) Hospital located in San Antonio, Texas

, which opened to veterans in November 1973. There is a petition under way, campaigning to have the Presidential Medal of Freedom awarded to him posthumously...and no, he didn't already have one of those. The petition can be found online at: http://www.ipetitions.com/petition/audiemurphy/

He is a seriously tiny man.